A wise man once observed that in the circumstance that requires their usage, umbrellas, handguns, and ladders have no substitute. While those first two may be easy for the businessman or the police officer to carry, a ladder most certainly requires some thought as to how you’ll transport it.

Sure, you can simply drop it into a truck bed and tie it down, but that leaves it laying on top of your tools and everything else in the truck and, of course, to get to them, you’ll have to move the ladder (and remember to put it back!). At the end of the day or before that first cup of coffee, you might even have some trouble getting it secured in the first place and end up creating a situation like this…

At the same time, if you are carrying a ladder that is substantially longer than your truck bed, you can be cited for having equipment hanging too far over the tailgate and, even if you have all the proper flagging on that ladder, you still might be liable in an accident, and you know what that means – insurance claims, frivolous lawsuits, and a loss of the income that truck could be producing on the jobsite instead of the body shop.

Putting a 12-foot ladder in your van? Forget about it! If you don’t have a rack on top, you can plan on scratching up paint, denting sheetmetal, and inviting rust to take hold of your new van.

A ladder rack is great, but as trucks and vans have gotten “taller” over the years, what was once easy to reach has now become so high that you practically need a ladder just to get to the rooftop rack that the other ladders are stored on! At the same time, if you are precariously balanced trying to reach a heavy fiberglass ladder at the very tips of your fingers, you’re asking for an injury – you, your employees, or the vehicles around you as you unload.

Why use 1960 technology on a modern truck? The average roof height of trucks from the major manufacturers (Chevrolet, Ford, and Dodge) in their 1960 lineup was 68 inches and now, in 2017, that height has gone up to 79 inches and where once the four-wheel drive was considered an expensive option and fewer than 1 in 20 trucks were equipped with it, now, that number is closer to one in three – and that adds another 6 inches. 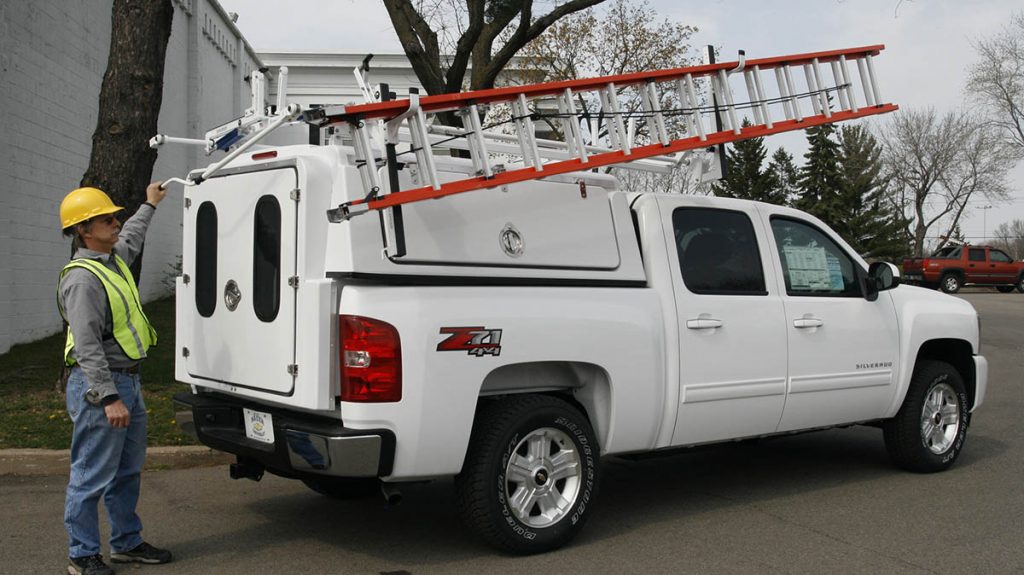 Trucks have changed a lot in the last fifty years and now, so has the ladder rack.

At Expertec, one of the most popular items we have been installing is Prime Design’s Ergorack ladder racks. They took an idea that has stood the test of time – the humble ladder rack – and made it better by making it safer and easier to use.

What’s even better is that Prime Design has used these same cues to rethink that ladder rack for today’s cargo vans, too. The simple fact is this – smart owners and contractors have seen these brilliant designs and are using them and those same guys are tired of crawling around on slippery bumpers, tires, and trying to manhandle a 50 pound ladder off of a rack 8 feet off the ground.

What we like most about this new generation of ladder racks is this – they still only require one person to load and unload, so they are as efficient as the most basic ladder rack ever made, but infinitely safer. In fact, where once you had to wrestle with straps and ropes while on tiptoe, this new generation deploys in less than 20 seconds and uses simple hydraulics to make a hard job a lot easier.

Right now, the most popular Prime Design cargo racks we’ve seen customers using in their fleets and proprietary vehicles are:

Trucks and vans have changed a lot over the years and while the need to haul and store ladders might be constant, we’re happy to see that companies continue to develop better and safer ways to help industries and workers haul what they need and be safe while they do it.