How Not to Upfit Your Work Vehicle

You’ve seen them – on the jobsite, in traffic, at the home improvement store…

They might be new or they might be virtually antiques, some may even have nice paint jobs of leftover house paint over fiberglass tape.  They are the trucks and vans driven by men and women that have been “customized” to do jobs never intended for them.

Now, let’s get one thing straight – in no way, shape, or form do we at Expertec begrudge folks who are making the most out of what they have.  We’ve been there and done that – using the old family station wagon and “customizing” the luggage rack to hold ladders while the work truck was waiting on a new transmission and using the rusty old farm truck to get to the jobsite when the new one wouldn’t crank at 30 below.

In fact, it’s not uncommon for us to meet with new customers whose first idea was to build shelves in their own van or re-weld a ladder rack and then, came to understand that the amount of time, effort, money, and weight such a project entailed meant that their new van could not possibly store and handle as they wanted.

Those folks realized, as thousands of our clients have over the years, that time does equal money and that pressure treated lumber is far heavier and more expensive than aluminum and while it might be fun to build a few shelves for a work van, making a 1987 short bed camper top into a slide-in 2017 service body not only is hard, it also looks terrible.

So what should you actually consider before you, shall we say, “customize” your work vehicle?  And yes, we’ll say “customize”, since many of the items we’re talking about are installed unsafely with little regard to cargo capacity, load distribution, the vehicle’s overall capabilities, and even transportation laws.

This may sound simple, but anyone who has ever started down the path of making a truck or van more work-friendly knows it can be hard.  It’s a lot like figuring out where the television is going to be in a new house, because, once you pick that spot, everything else has to work with it. 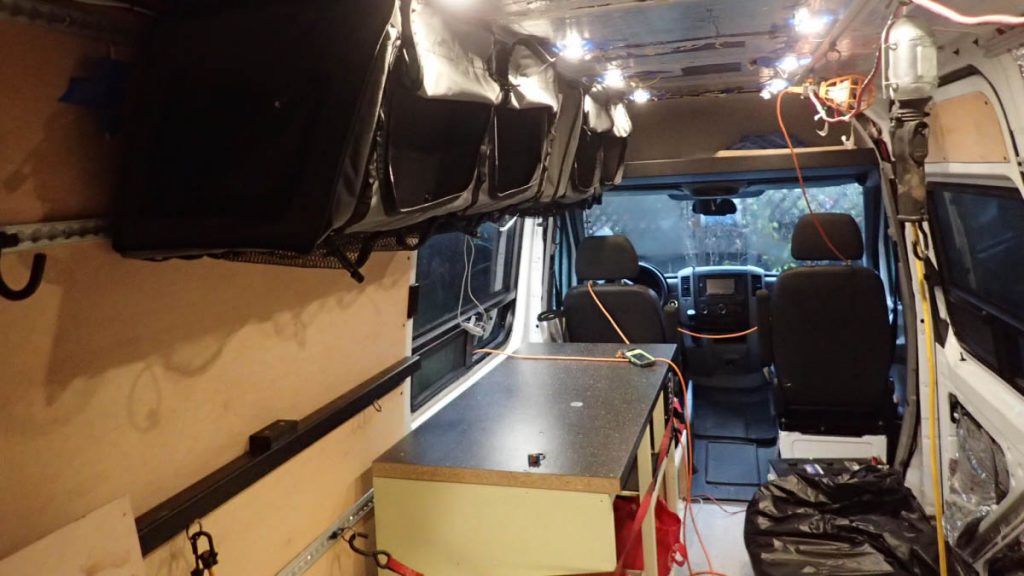 How much are you willing to spend?

This is really a slippery slope.  Too many times, small business owners look only at the cost of the materials to, for example, build shelving in a van or cobble together a ladder rack.  Guess what?  There are plenty of hidden costs, too.  Do you have to spend a day or two cutting and installing all the “stuff” that you’re creating?  If that’s the case (and it usually is), then it’s an unfair comparison to say, “I can do all the modifications myself for $375 in supplies and a day.”

Take a minute to factor in your own hourly costs – what your customers pay you an hour, and you can quickly see that you’re losing money in this deal.  False economics only work against you, because remember, a professionally upfitted vehicle is a business expense that can be deducted and amortized in your taxes.

How is it going to look?

Let’s face it, a lot of this “do it yourself” stuff looks bad.  When you pull up to the client’s office in a rusty, poorly maintained beater that is obviously not cared for, do you think that they won’t notice?  The same holds true if the storage areas of a van are poorly built and maintained and tools and inventory are stored pell-mell all over the place.  What does that say about how you work and the care you take in the jobs you do?

We know that a sub-contractor might be able to pull it off – a kid that is learning the ropes and whose truck has to pull double-duty since the budget isn’t in his pocket to buy a newer one – but for an established contractor or a company with a budget?  Cheap looks cheap, and your customers know it.

Who has to fix it?

Guess what?  If you build it yourself (or outfit it yourself), then you have placed the responsibility squarely on your own shoulders for having to fix it.  Warranties, maintenance, and even liabilities are all on you if you choose to build something yourself and if you and your vehicle are involved in an accident, unsafe modifications can create charges of negligence as a result of trying to save a few dollars.

As professionals in the world of upfitting and outfitting work trucks and vans, we’ve taken decades of experience to source and understand how to build safe, effective vehicles for the trades and fleet usage.  So many times, over the years, we’ve been called upon to fix what some well-meaning soul built that we cannot help but remember the famous quote from Leonard Brownell, the revered American gunsmith, “The bitterness of poor quality remains long after the sweetness of low price is forgotten.”

Buy the best you can, involve experts in that process, and create the workspace that can make you efficient, safe, and provide a professional image for you and your company.